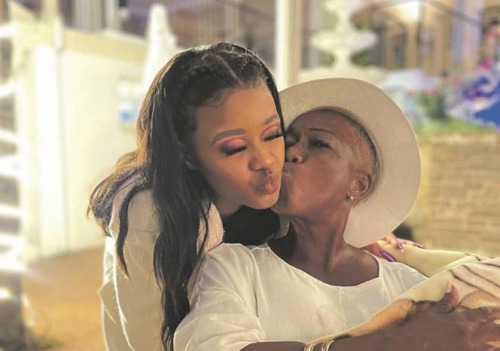 A few months ago, Mampintsha confirmed that the two had reunited with a cozy photo on his Instagram page, but the peace came with an expiring date as the heated war doubled.

Last week, it was reported that the West Ink CEO dumped his mom, Zama, and other family members because she reported him to different media houses about not getting paid for featuring on the couple’s reality show.

Speaking of the existing enmity between the Gqom queen and her mother-in-law, it was revealed by Daily Sun that the singer posted on her WhatsApp status about why she hates Zama.

“Ingakho umamezala ngingamthandi, ilamasimba awenzayo, nxa lo mama une drama,” which means (this is why I hate my mother-in-law. She’s doing shit and is full of drama).”

Zama also responded saying she hates Babes and doesn’t endorse her as a wife to Mandla.

“I saw her WhatsApp status and I don’t like her either. In fact, I hate her. Mampintsha should not have married her.”

Download:  AKA – “Doctor says by the 16th I’ll be ready to go out into the world again”

“Babes … is not wife material,” she added.

“I don’t want to ever see her again, mainly because she abuses my son … and we have to protect Mampintsha from her.

“I’ve had it with this girl and Mampintsha must never bring her to my house again.”

Zama has dissolved her relationship with Babes and does not want her to come to her funeral.

Mampintsha’s mother also spoke of not being able to attend her grandson’s birthday.

“I love my grandson and I feel bad for missing his birthday, but his parents are evil. By now we should have performed the isiphandla welcoming ceremony and burned impepho for Sponge, but Babes has constantly refused to bring him home,” said Zama

“She’s clearly stated she will not allow traditional ceremonies to be performed on her son because she’s a Christian.”

Zama believes the apology from Babes Wodumo months ago was fake and it was a means to lure her into the reality show.