Gigi Lamayne took to social media to dispel rumors that she is leaving hip hop. The Ice Cream hitmaker released an album, which has topped the charts.

Gigi has accomplished a lot this year, from jumping on the podcasting bandwagon with her Point Of View Podcast, on which she has hosted several notable Mzansi celebrities, to her collaboration with Rock and Co.

Gigi took to Instagram to address the rumors that she is retiring from music.

The rapper claimed that she is being silenced and sabotaged and that she has no idea why.

“I will never quit Hip Hop. Whoever is doing this need to stop. I’m being silenced and sabotaged. I don’t know why,” she wrote. 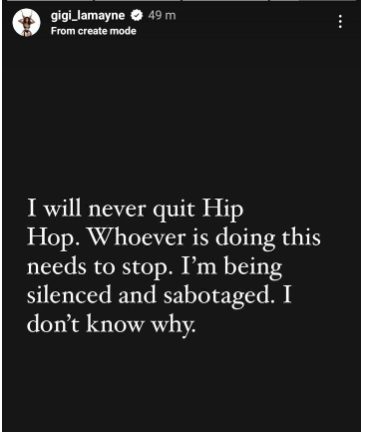