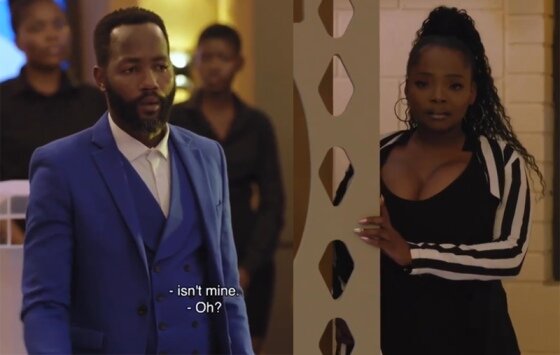 The announcement follows after Isolezwe’s report last week, that their contracts weren’t renewed for the 9th season of the show. “Nosipho and Poster Gwala’s contracts have not been renewed which means that their characters have come to an end. Omuhle, on the other hand, resigned now and didn’t even wait for the filming of the season to end as he was complaining about the changes surrounding her character that will happen when the new season starts. She just got annoyed and didn’t want to continue filming,” said a source.

According to Uzalo and the SABC, the actors will exit the show at the beginning of season 9, which will debut early next year. In a statement, they said: “As we look back at Nompilo’s portrayal of Nosipho, the viewers have seen her fight with Nkunzi over her Father’s estate, making Nkunzi her enemy and almost being buried alive. She has fallen in love over the years with a ruthless criminal called Amos, a quick stint with Mondli, abusive Njeza, and finally finding her Prince Charming in Pastor Gwala. She is business minded and became the Mashonisa of Kwa-Mashu and opened a business hub that created opportunities.

Pastor Gwala came to Uzalo when the community had lost the church to Nkunzi and helped them wrestle the church from Nkunzi. In his journey, Pastor Gwala learns that Nkunzi is his biological Father. Pastor Gwala has also been through his umjolo tales over the years. The viewers have seen him fall in love with Zekhethelo, a forbidden relationship, and has fallen in love with Nosipho, much to everyone’s disapproval and distaste of their relationship,” reads the statement.

Thuli Nhlapo, Acting Channel Head of SABC1 has wished the actors all the best in their future endeavors. “We want to take our hats off to the stellar performances of Nompilo and Menzi over the years. Their portrayal of the characters, Nosipho and Pastor Gwala, will forever be embedded in the hearts and minds of our viewers. Great is the art of beginning, but greater is the art of ending – Henry Wadsworth Longfellow,” she said.

“We are incredibly honoured to have worked with such talents. Nompilo has been an integral part of Uzalo since season one, she has brought us a remarkable rendition of Nosipho that the fans will never forget, and Menzi’s portrayal of Pastor Gwala has been nothing short of exemplary. Our viewers love them, and so do we. We wish them all the best in their future endeavours,” said King David Mukwevho, Series Producer.

The actors’ departure comes hot on the heels of Omuhle Gela’s shocking exit. The actress who plays Nomaswazi, called it quits with immediate effect recently. According to Zimoja, Gela left the production following a contractual disagreement.

“She is fuming. She decided not to show up because she feels disrespected. I don’t blame her, how do you agree on certain terms with an actor and then you change the contract. That is unfair,” said a source.

She later confirmed her exit on her Instagram timeline that she had dumped the show and said the reports were true: “I’ve made the decision to leave the show with immediate effect; everything said in this article is 100% true and I have nothing further to add or dispute.”