In the most recent episode of Carte Blanche, the shenanigans of the well-known beauty salon Tammy Taylor were again brought to light. The reality show that looks into things says that Tammy Taylor USA canceled the Master Licence Agreement with Tammy Taylor South Africa.

Their investigation then led them to find out that they are allegedly selling fake products to their customers because they no longer get stock from Tammy Taylor in the USA. It is said that the franchise uses two printing companies in Midrand, and Marvel Group is one of them.

“Basically, what we do is, they [Tammy Taylor SA] send us the artwork and we print directly onto the bottles,” said the owner of Marcel Group.

Mel Viljoen, who is on the show Die Real Housewives of Pretoria, and her husband Peet Viljoen own Tammy Taylor. They are being accused of copyright infringement because their contract with the USA branch supposedly ended. But the couple still says that the franchise belongs to them.

Download:  Update: Nomzamo And Crew Reportedly Did Nothing Wrong

It’s not the first time that the company has been found out. Even with all the drama, though, people still buy franchises.

Since the episode came out, social media has been giving the owners a hard time. Have a look…

Earlier this year, Lerato Kganyago announced that she had acquired a Tammy Taylor franchise in Groenkloof, Pretoria, but it had to close down.

“It’s been a truly exciting journey and we would have not come this far without your support. Serving you has been nothing but an absolute pleasure,” she wrote.

“With that in mind, it does, however, sadden us to inform that Tammy Taylor Nails Groenkloof will officially closing its branch operations at 57 George Storrar Drive, Groenkloof Pretoria as of 31st March 2022,” she continued. 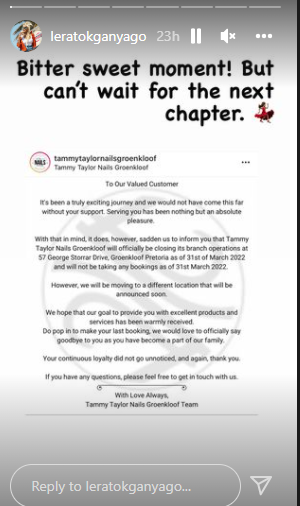